Children's and young adult literature collected at the Macdonald-Kelce Library at UT. 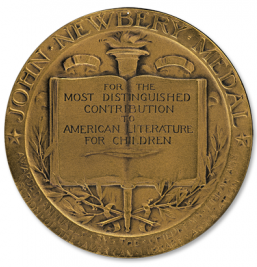 The Newbery Medal was named for eighteenth-century British bookseller John Newbery. It is awarded annually by the Association for Library Service to Children, a division of the American Library Association, to the author of the most distinguished contribution to American literature for children. The Newbery Award became the first children's book award in the world. Its terms, as well as its long history, continue to make it the best known and most discussed children's book award in this country.

It was first awarded in 1922. A medal book and honor books are announced each year.

A list of Newbery medal winners and honor books.